[dropcap]B[/dropcap]arnardo’s have just launched their fantastic #carebandb campaign to highlight the state of housing provision that care leavers face across the UK. Mimicking Airbnb, the campaign was devised in-house and is brilliantly executed. This type of campaign could be delivered relatively cheaply by most charities – what are the lessons learned?

Carebnb taps in to the  national obsession with Airbnb. The campaign is delivered in such a way that it requires very little introduction – this is no mean feat so hats off to the Barnardo’s team. Once you’ve whacked in your postcode the resulting ‘rentals’ pop up on a results page, giving you a really clear understanding of the types of places care leavers end up in. Would you fancy a stay in ‘The Cold Hart’, ‘The Grim Retreat’ or ‘Bleak Street B&B’? My one criticism of the user experience is the lack of geo-specific content. If I type in a Glasgow postcode I end up with the same results as someone who has put in a London postcode. While it would clearly involve significantly more work I believe more location-specific results would have prolonged the campaign and made the content more shareable across social media. Could Barnardo’s even have tied it in to local authority data they hold on care leavers?

[mark]2. Have a strong call to action[/mark] 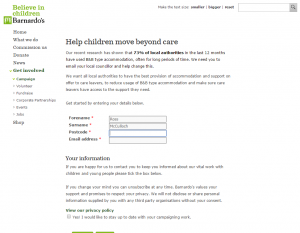 That simple ‘act now’ button under each Carebandb listing is begging to be clicked. Doing so takes you to Barnardo’s e-action page – ‘Our recent research has shown that 73% of local authorities in the last 12 months have used B&B type accommodation, often for long periods of time. We need you to email your local councillor and help change this’. A really clear call to action. The next page then tells me about an upcoming campaign and asks me to enter my details once more to take part in late 2014. It may well be that this second request is Scotland-specific but ultimately I’d like to feel like I was taking that original action mentioned – emailing a local councillor. As an aside I’d love it if the call to action to ‘act now’ kept me on the Carebandb site, with a simple form to submit my details there. 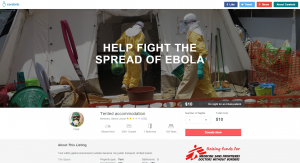 There’s two big problems with the Carebnb campaign – SEO and social media. There’s an existing Carebnb website, offering a socially-aware spin on Airbnb by spoofing the site with the ultimate aim of combating Ebola. Instead of campaign calls to action you’re asked for cold hard cash to buy things like tented accommodation in Sierra Leone. OK so it’s spelt differently – ‘Airbnb’ rather than ‘Airbandb’ – but will the public know the difference? Search for ‘Carebnb’ and that ebola site dominates page one of Google. I’d also like to see more opportunity to share the individual listings on the Barnardo’s Carebandb site – there’s no social sharing buttons at all. Tie these in with the geo-specific content I mentioned earlier and I think the campaign could gain more traction.

[mark]4. Use images to tell the story[/mark]

Those images on Carebandb site really stand out – I understand what Barnardo’s are trying to say without me having to read too much. Again I’d like to have seen a broader range of images tied in with geo-specific results. The video which features on the results page also helps users understand the reality many care leavers face and increases the likelihood of that ‘act now’ button being clicked.

Possibly my favourite thing about the Carebandb site is the fact that it avoids being too preachy. We’re given shocking facts and we’re asked to take action but it’s done in a fun, light-hearted way. Barnardo’s clearly understand the type of content people wish to consume and share online – I just wish they’d made sharing easier.

Could your charity use a spoof website as part of an upcoming campaign? Get in touch if you’d like a chat about it.